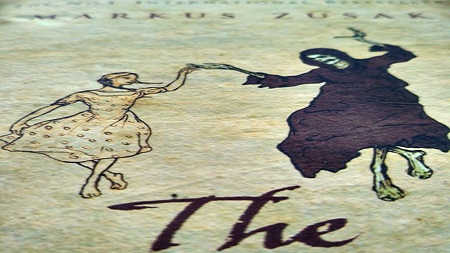 I had only heard about this book. Many people said it was good, other said that the film was even better. Certainly, the book was on my reading list and I would have gotten to it in due time. But in this case, Vel was the perpetrator, who unknowingly moved The Book Thief up the reading list and I’m glad that she did. The Book Thief covered one of my favourite topics – books, words, and language. More importantly, how the designed use of language can influence the lives of many people, as well as the fate of a single human being. But first…

Without giving too many spoilers – The Book Thief is the story about a girl by the name of Liesel Meminger, who lives with her foster parents in Molching, Nazi Germany. The narrative is told from the perspective of Death itself, who met Liesel a.k.a. the Book Thief three times. The Narrator describes Liesel’s life and the reason she becomes obsessed with books or rather, stealing particular books. From the beginning, I wondered why there was the need for Death to be the Narrator. The story could have been told by anyone – one of Liesel’s neighbours, her teacher or any other person, who is not closely related to the family, but has the ability to be just a spectator and has acquired the manuscript of the book Liesel wrote. However, to me there is a perfectly good explanation as to why Death is the narrator:

Apart from Death being ever so present, language is the main topic of The Book Thief. Initially, Liesel steals the occasional book or two, right after the death of her little brother and the separation from her mother. She then moves in with her foster parents and starts going to school, where she is made fun of for not being able to read. Gradually, Liesel learns about the importance of words, reading, understanding, as well as language’s subtle effects on different people. From the comforting words of her step-father after her sudden post-nightmare wakes, to the slogans and phrases repeated by her extremely nationalistic neighbours, to the silence of the mayor’s wife, who seemingly never speaks, but lets her library be her voice…Liesel also learns how to adapt and be flexible, she learns when and how to speak, when to remain silent, as well as when to take matters into her own hands, or rather – words.

But what were the other topics in the book, which felt particularly close to me? Well, first of all, it started with the two things that have fascinated me since middle school – Death and chocolate. Ever since I was little, chocolate was my constant companion and it was always a comfort food for when I encountered difficult situations, such as death. But death is usually presented as this supernatural terrifying event when it is one of the most natural events to occur. Or as Death puts it

It’s a fact, pure and simple.

There is a stigma around the topic of Death – what to do after a loved one has passed away or what happens after Death? But, as the book shows, words heal, talking heals, sharing also heals.

I also related to Liesel and the way people spoke about her father – a communist! I had a similar experience growing up. My mother was born in the Soviet Union and this affected my relationship with potential friends because both they and their parents believed that my family was communist and therefore – the enemy. This was a big deal in post-Communist Bulgaria and it resulted in a very discriminatory behaviour towards me and my family. But again, learning how to communicate with someone, whose strong conviction dictates their every move, is a rather difficult task, which requires patience and the ability to try and find a common ground for a discussion. Ultimately, as the Book Thief discovered, it always leads to language, perception and the power of words.

And here’s another fun fact: the largest bomb raid in the book happens on the date I was born.

I was recommended this book by several people, but only got to reading it after I joined a (very short-lived) book reading club at work. It brought me a wide spectrum of emotions, anger and frustration, happiness and laughter. Its novelty and polished writing were a treat.

When we studied the time period depicted in the book, I did wonder what it was like for the German population. On one side we were told of the monstrosities of the Nazis and on the other of the brave souls who hid Jews, communists and other endangered humans, who helped them escape to a better life beyond the reach of the Reich. I expected more of the same when I started with this book, and whilst both topics were heavily present, what came to the forefront was the unquenchable will to live of the characters.

Nel has already covered the topic of words and language in her view. Another point, hand in hand with language, stood out to me and that is the incorporation of illustrations throughout the book. In most books, illustrations are included as an afterthought, sometimes in later editions, when the book is already established, by some more or less successful artist, who has been inspired by the writings. In The Book Thief, the illustrations play an integral role, from the introduction of the Nazi flag to Max’s gift – a book full of sketches, and the story of the World Shaker.

I have wondered whether the use of such visuals, including the highlighted text on many of the pages, the italicised words and general formatting of the page were utilised because they are the author’s style or because at some points even words alone fail to emphasise the importance of a concept. Instead of words, a symbol is being utilised, sometimes of fear (the colours of the flag), others of hope (the tree). Drawings pre-date language (reference: cave paintings), thus touch something primal in the mind, which language at its worst never hints at and at its best overexplains.

My favourite moment remains the exploration of the library. It was like the moment from ‘Beauty and the Beast’, everything is going to shit and there you have it – a room full of books –suddenly the world is a slightly better place. I dream to build myself such a room – not a vast one, but a warm, quiet one, and to make of it my shelter, where words – and illustrations – soothe the mind despite the bombs falling outside.