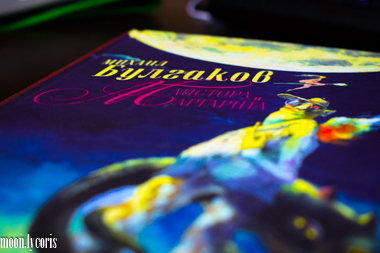 Reading Russian literature is always a bizarre experience for me, even when I know something odd will be going on, I am still amazed at just how odd things become. After reading a collection of Gogol’s short stories I thought I was ready for anything, and of course I wasn’t. Now, after The Master and Margarita, I have surrendered all expectations, and simply enjoy the imagination and talent of Russian authors to make seeming nonsense make sense.

The Master and Margarita, if you haven’t guessed it, is odd. Brilliant, witty, provocative and very, very odd. Unlike other classic Russian novels and stories I have read, it mercifully lacked overlong and therefore boring descriptions of scenery and it did not depress me. On the contrary, this book made me laugh often and left me at peace, with the forces of ‘good’ and ‘evil’ working together towards a common goal.

We enter the story in a faithless Moscow, where an editor lectures his poet friend on how Jesus never existed. The poet was commissioned to write a witty article for the upcoming release of the editor’s paper, and the article is written masterfully, but rather than emphasising on the non-existence of Jesus, it focuses on how impossible it was for him to be the son of God. This, of course, attracts the attention of the newly residing in Moscow Woland, you guessed it (if you have read Faust), the Devil, who naturally finds their conversation amusing and joins in. Trouble only happens when the editor goes on to say the Devil does not exist either – as how could he, when Jesus doesn’t – which leads to the unfolding of a shocking, comical and bizarre series of events the centre of which are the at the time literary and theatrical elite. More importantly, it leads the Devil to tell us the beginning (or middle?) of a story about Jesus and Pontius Pilate, the author of which is the Master.

The Master himself we only encounter halfway through the book. Shortly after, we encounter Margarita, and are treated to the next part of the Master’s story. The ending comes later, as you can imagine, and there is also some left to be written.

Overall, for me, the book aims to show us the power of forgiveness and mercy. Margarita, when asked to name a wish for the Devil to fulfill for her, leaves her personal desires aside, and bestows her mercy on Freeda, whose story we learn at the Devil’s Ball. Yet it is not the Devil who lifts the curse on Freeda, it is Margarita herself, presumably in her power as a Queen of the Witches (for the night), her royal blood (on which I can only roll my eyes), but actually in her power as a woman. Similarly, the Master releases Pontius Pilate.

A couple of things which made a huge impact on me were the writing style and the timing of the events. The first is loose, relaxed, frequently breaking the line ‘4th wall’. The reader is not a mere observer, they are an active participant – and the author often encourages them to come along, to follow the author in an informal and easy-going manner, the way one would take a friend to their favourite coffee shop through a crowded street. On the former I merely want to note the events take place on the spring’s first full moon – a sacred time for Christians, when Jesus is crucified and then resurrected – which coincides with the aforementioned Devil’s Ball.

Did Bulgakov wish to write a story on the encounter between Jesus and Pontius Pilate himself? The Master is widely accepted by critics to represent Bulgakov, the way many of the characters in the literature and theatrical elite represent many of Bulgakov’s contemporaries. Perhaps the author knew he will be shunned if he wrote on a topic seen as religious, as it did not fit the agenda of his time, and therefore wrapped his story in a wider, weirder one – where the Devil acts in accordance with the forces of good, and – through much mischief, trickery and foolery – sets things right for the Master and his love. The ending of both the Master’s and Bulgakov’s stories is the same.

P.S.: I do feel for all the black cats which ended up suffering as a result of Begemot’s frollocking and trickeries. 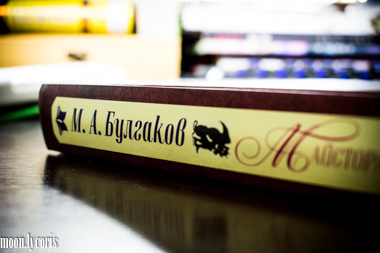 The Master and Margarita was probably my first head on encounter with Russian literature on my own terms. There were several short stories by Gogol and Chekhov that we had to read in school, but as Vel said, every encounter with Russian literature up until then was very depressing. That doesn’t mean that there is no value in those stories. Quite the contrary. But it feels nice when you stumble on something you didn’t expect and it surprises you pleasantly.

The first time I read The Master and Margarita, I felt that the main narrative is about the fight between “good” and “evil”, the real and the unreal. And in some way, between the Soviet state and the ordinary Russian citizen trying to survive the multiple “truths” pushed each day by the Department for Agitation and Propaganda (Agitprop). Since religion and spirituality were taboo and were downright mocked at times as evidenced by the conversation between Mikhail Alexandrovich Berlioz, chairman of the literary bureau MASSOLIT, and Ivan Nikolayevich Ponyryov (Bezdomny), an aspiring poet commissioned to write a book against Jesus and his existence. As Vel stated, Berlioz’s problem with Ivan’s book was not only that Ivan did not deny Jesus’ superpowers and existence, but he treated him as a historical figure. Similarly, Bulgakov attempts to make a seemingly unbiased commentary on contemporary Russia, whilst still employing the tools at his disposal at the time – fantasy. You’re safe to write almost anything, as long as it is presented as comedy and fantasy.

Bulgakov poses many different questions – What is real and what is an illusion? What is good and what is evil? Is evil really evil? How would one act if one’s basic understanding of the world crumbles? What does one do when suddenly the unexpected happens? How does society deal with problematic people? What does surviving mean? Who is in charge of one’s fate and what happens, when one “suddenly becomes mortal”? Woland (the Devil) and his entourage arrive in Moscow in order to assess the state of humanity at this point in history and meddle if any adjustments are needed. As Woland states, humans haven’t really changed much from the last time he visited the Earth. They are arrogant, corrupted, greedy, and cruel towards those who are weaker than them. They also try to tell on each other in order to preserve their righteous image in front of society. And when faced with something unexpected, they either shut down; vehemently deny everything; desperately try to save themselves; or turn to taboos much like Ivan did when he grabbed an icon and a ceremonial candle to fight the Devil. This was also a reality for Bulgakov. Reporting, criticizing and banning each other’s works, because they are not in line with the status quo.

Many agree that The Master and Margarita was semi-biographical: the Master being Bulgakov himself, while Margarita was a reference to his third wife – Yelena S. Bulgakova (Елена Сергеевна Булгакова). I was intrigued by Margarita’s motherlike protection over the Master and his book, as well as her attempts to nurture the Master who, at this point, had lost the will to write and live. I was surprised to find out later, while going through the detailed notes at the back of this edition, that the reason Margarita was treated like royalty in the story is because apart from his wife, Bulgakov draws inspiration from Margaret of Valois and Marguerite de Navarre, who in their time acted as patrons of the arts among other things. Whether it was a prediction or not, Bulgakov did not live to see The Master and Margarita published. His wife’s efforts and protection over his literary works made publishing possible.

This is also where something else clicked for me. When reading The Master and Margarita this time around I realized that as much as this is a story of the fight between good and evil, and their reliance on each other. It is also the story of one’s fight with society, with one’s peers and with oneself, and most importantly, finding peace at the end of the day. The Master’s dream was to see his book about Pontius Pilate published and in order to fulfil his dream, he lived off his savings for two years. When he was finally satisfied with his work, he presented it to many editors, including Berlioz. Following a quick rejection and having almost no money left, he loses all hope of achieving something meaningful in his life. He doesn’t want to be a burden to Margarita, so one cold winter night he leaves for an insane asylum, where he intends to live out the rest of his life as an empty shell, plagued by mental illness.

During his lifetime, Bulgakov’s works were often banned or criticized, and this can also be seen in the way the Master speaks about his mental illness. Feeling useless and depressed, because his book was rejected, the Master voluntarily locks himself in an asylum. The cold tentacles of the octopus that mercilessly follows the Master are a reference to the way the state, Bulgakov’s peers and censorship crippled his creativity. The depiction of MASSOLIT and its headquarters, Griboyedov’s house, are a commentary on literary bureaus and how bureau members were selected. The conversation between Korovyev and Begemot (Behemoth), part of Woland’s entourage, is very telling. They compare the poets and writers in Griboyedov’s house to pineapples growing in a farm, not much different from each other. And later when they are stopped at the entrance of the house, because they do not have a writer’s pass to enter, they pose the question whether a true writer really needs a pass in order to be considered a writer.

The Master and Margarita is also a story of forgiveness – Korovyev and the Moscow society, Pontius Pilate, the Master and Yeshua Ha-Nozri (Jesus), Margarita and Freeda. When I first read the book I was puzzled about certain acts of forgiveness, more specifically why only Margarita could bestow forgiveness to Freeda. And I think I found the answer – it’s because Margarita is a woman and only a woman can forgive crimes against femininity.

I definitely enjoyed re-reading the book and was very pleasantly surprised that this edition had almost 50 pages of detailed notes! They gave me a different perspective on some of the characters and explained some questions I had about certain scenes. I would always recommend this book to anyone, who hasn’t read it.

Have you read it? What are your thoughts?