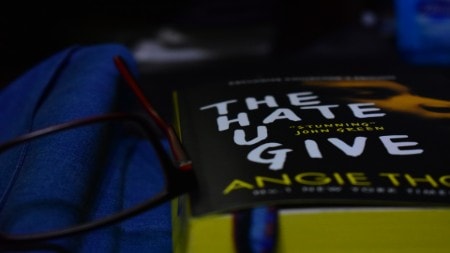 The Hate U Give is the last of the books I got to choose from the Goodreads awards for 2018. The title intrigued me, as well as the premise and some of the reviews, so I decided to give it a go. After I had chosen this title, I realised the number of books by authors of colour I have read is shamefully small, and I decided to make a conscious effort to read more diverse literature. The Hate U Give fit in quite nicely with this agenda in two ways: firstly, it gave me a glimpse into the daily life of an African-American teenager, something my growing up in Bulgaria could never provide, and secondly because towards the end of the book the empowerment a single voice can give a community appealed to me greatly.

One of the lenses I can look at this book through is that of black and white, aka “ I cannot relate”. That is where I started off from. The other, which I ended up employing a lot more towards the end was that of commonality – it turns out I actually have a fair bit to relate to with Starr, despite us growing up in very different cultures, times and parts of the world.

The things I could relate to when it comes to Starr (as well as those I can’t) range from the mundane all the way up to defining aspects of her character.

The Same and the Other – Daily Gripes

On the every-day side I found her mix of reluctance and desire to be part of parties the exact contradiction I still share in many social situations, even though I am meant to have grown past that point. When she recalls the sleepovers which happened at her place, I could remember the fear I had of my classmates’ visits, as I lived at my grandparents and fretted what would/could/might happen, and ultimately if I would still have friends come the morning. Nothing as dramatic as the gunshots Starr and her friends hear happened in my case, but the fear was there. Eventually, the sleepovers ended for both myself and Starr.

Starr’s relationship with Chris was one thing I could not relate to on the other hand. To find a sixteen year old boy, who has the mental maturity and respect described in the book is phenomenal. I found myself rooting for their relationship to continue, despite its eye-rolling soppiness (all relationships should have a bit of soppiness, don’t get me wrong) and classic teenage dramatisation about things which really do not matter all that much when you look back on life.

The Same and the Other – the Important Things

On the other side of the spectrum, Starr’s break up with one of her friends resounded with me quite deeply. Before making that decision, it is as if you are at a crossroads on every interaction, and you keep mental tabs of what the other person gives and what they take from you. It is exhausting, and painful, especially when you realise a friendship cannot continue because the person in front of you refuses to see how they could have hurt you, and therefore denies any need for change. I have had to end a few such relationships and it left me with a bitter, hollow feeling, but I also felt better and stronger for having finally said ‘enough’.

Throughout the book Starr learns how valuable her voice can be to attempt a positive impact on her community. Things are not always within her control, but as events escalate, she realises holding herself back and hiding allows for the same old conflicts she has grown around to continue to breed. I found it quite clever how the author, Angie Thomas, uses the phrase “no snitch” at the start and progresses it to “be a snitch when it matters” – otherwise true change is impossible. It was, very difficult for me to relate to Starr’s struggles – I have not, thankfully, been witness to any gun violence, or been part of civil unrest where riots would go through the streets. On the other hand, reading about how Starr faces such hardships and does the best she can has also made me more confident in taking a stand on topics I feel strongly about, without shame and fear of whether those closest to me would abandon me.

The mundane would not be the same without the fighting the battles which really matter, and without giving voice to what we believe in, in fact – that is the whole point of speaking up and daring to change things – so the mundane can be better. The Hate U Give made me think on a fair few topics, some less comfortable than others, and it allowed me to explore a reality with which I have very little personal contact. These two things made the book worth it for me, despite the rough around the edges writing style. Ultimately, I think The Hate U Give shows how despite the hardships and trials it will take, there is hope for a better reality, one of coexistence of races, as well of different social statuses. This is a hope I believe America, and the world as a whole, desperately needs right now.

This month Vel really managed to challenge me by listing Angie Thomas’ The Hate U Give as our November read. The book isn’t difficult to read. Actually, the pace was rather nice and there was always action around every corner. The topic, however, is something I’ve clashed with only through TV series and news on my Facebook and Twitter feed. So, what is the book about?

If you have some inkling of Angie Thomas’ life and published work, then you will know that her stories revolve around the life of African-Americans in the US. The Hate U Give continues this tradition. Thomas tells the story of Starr Amara Carter, who exists in two worlds simultaneously and she is never truly herself, unless she’s around her family. The main reason: the colour of her skin.

On one side, Starr lives in the ghetto, where drug deals, domestic violence and drug use is not something out of the ordinary. But she is shielded by her father, Big Mav, who retired from being a drug dealer and a gang member after a three-year jail sentence. As Starr puts it, most people know her only as Big Mav’s daughter because she doesn’t interact or have any friends in Garden Heights, her neighbourhood, except for when she is at the cash register in her father’s store. Her other life doesn’t help her much either.

As a way to distance Starr from the “ghetto life”, all of the children in her family are enrolled in a private school, about 45 minutes away from her home, where 99.9% of the students are white. Thus, she and her siblings always stick out as the “token black children” in school. What’s more, she has to be on her constant guard not to seem “too black” or “too ghetto”. All of her mannerisms and her speech are filtered into a more appropriate behaviour for her surroundings.

While this isn’t an uncommon problem, which has been around for a few decades, Thomas sets these issues in the context of the birth of the Black Lives Matter (BLM) movement. Although, the movement is not explicitly mentioned, all of the underlying causes for its formation are explained very simply in the book.

To be honest, at first, I didn’t think I could give the story any justice because the circumstances in the narrative are very far from my daily life and it’s not something I have access to, even if I wanted to be more involved and educate myself on the matter. So, keep in mind that all of my ramblings will be from the viewpoint of someone who lives in Eastern Europe and has a slightly different experience with racism and discrimination.

What I liked most about The Hate U Give is that Thomas has included so many different types of people and personalities when talking about her neighbourhood. She doesn’t shy away from presenting the black vs. white issue from different angles. More importantly, she shows how different people, regardless of race, can help resolve or exacerbate an issue. Therefore, making the problem seem more like this collection of beliefs, experiences, upbringing and prejudices against another set of the same.

Generally, no matter how you categorise people, be it race, gender, religion, social status, wealth, etc., you can still find a division within the category itself. As a rule, most people prefer to deal with ready-made and packaged descriptions (read stereotypes) of social groupings to make their life easier by avoiding to make their own conclusions about a person. Borrowing Tupac’s words, Thomas sums everything nicely in the following statement:

The Hate U Give Little Infants Fucks Everybody

Also famously abbreviated as Thug Life. It is the nature versus nurture debate all over again. Is a person inherently a collection of bad character traits or a product of the surrounding environment? There are valid arguments on both sides. However, Thomas shows that while one argument can be true for some people, such as the case of her half-brother’s father, King, nurture plays a key factor in determining whether that becomes a reality.

Speaking of this, Hailey, Starr’s former friend, is a very interesting character. At one point she expresses a rather feminist stance and is not afraid to voice it. But then she doesn’t see any problems with the microaggressions towards the main character and Maya, another friend of Starr. Why is that? I think that her strong feminist views are due to lived experience, either her own or her mother’s. The microaggressions come of a more ignorant position, where all of the knowledge she has accumulated is dumbed down to a set of stereotypes. The trio of friends disbands, because Starr and Maya have always had to behaviourally adapt to their surroundings, compared to Hailey, who never had to deal with such issues.

Looking at the bigger picture, the overall unrest and dissatisfaction of the treatment of African-Americans is felt throughout the book. There are many things in play when it comes to why this is the way it is: lack of opportunities, corporate interest, discrimination, stigma, familial ties, other outside factors, which pose as obstacles to the path of leading a peaceful and fulfilled life. These affect the life of the people in Garden Heights on a macro and micro level, and ultimately determines how the community thrives together.

The Hate U Give is one of those books, which talks about very important and contemporary issues, but presents them in a logical and simple manner. The book is a good way to spark discussion and to act as a gateway to familiarising a younger person with the escalation of the mistreatment of African-Americans by individuals in authority positions, which more often than not, leads to unlawful and unjust deaths. By giving Starr a voice, Thomas gives the push to other younger people to express their fears and talk about social matters in a more constructive way.

iThere are no comments