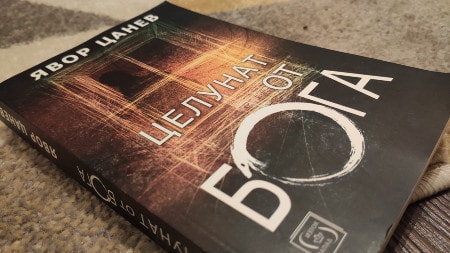 Yavor Tsanev is the first of a few Bulgarian authors who has made his way to our selected books of the year list with his Kissed by God, a collection of short stories, titled after one of the featured tales. I love a good short story, though I find I am very picky with what makes a short story ‘good’, it is easier to find flaws in a shorter piece of work for me, than in a larger novel. With this collection Tsanev both hit the mark and missed it very wide, in fact I was surprised by how much I was drawn to some of his stories, and how much I disliked others.

Let’s start with the ‘good’ ones, like Water to Water, Angry Times, The Well – all these I loved reading, and spent some time re-reading them immediately after reaching their end. There are a number of connections between these stories, definitely not in the narrative, but in their sparing explanations of setting and characters, and their depiction of movement, transition and emotion. These were a burst of a creative thought, seemingly rushedly sketched strait from a half remembered dream, but polished in a way that left roughness when it was needed. Only one of Tsanev’s longer tales appealed to me – The Old Cemetery, but here again he was more concerned with the emotion in the moment, than describing a generic setting.

Some of the stories I didn’t mind, but a few I very much disliked, especially the one which gives the collection’s title – Kissed by God – I genuinely wonder why the author has selected the least inspired story to be the lead one. Endless Misery, Vampires from the Hood, The Most Read – these all missed the mark quite widely on being a good short story, or even a good story. They do share some things in common too – they are lengthier, clumsier, clogged up with descriptions of generic characters and tropes, who suffer no change or enrichment. Every word in a short story must count, it must bring something definitive to aid the delivery of emotion to the reader, yet when Tsanev allowed himself to spend more words, it has impacted those ideas for the worse. At some points, he nearly outright says ‘I want you to feel <insert emotion here> now’.

The themes running through the book overall were diverse, and exciting, their setting was unpredictable – sometimes a modern city, then a fantasy world, then suddenly – a sci-fi dystopia. Tsanev has a rich imagination, which fills his works with whimsical and weird themes, blurring the lines of the bizarre and the mundane. I started each story from square one, and eagerly started on the next one, even if the previous one was disappointing – with such a wide range of subjects, I could never predict what the next tale would hold. A final gripe I have with the collection is how Tsanev has made use of his obvious influences from Western literature, to the point that his sentence structure and word choice when writing in Bulgarian were quite sadly very Westernised.

Overall, I liked the collection Kissed by God – it was varied and a little unusual, which sometimes made me ponder the darker corners of my mind, though not too frequently. Despite a couple of tales which struck a deeper cord with me, it was a quick read. I would like to pick up one of Tsanev’s newer books, as I am interested in whether he has polished off his style or has stuck to leaving his writings unrefined. If you are looking for something a bit different, and don’t want any strings of attachment, this would be a good choice.

I remember receiving Yavor Tsanev’s Kissed by God as a Christmas present in 2018. I was ecstatic, because I had just discovered Tsanev and a few other contemporary Bulgarian authors who dabble in horror, fantasy and sci-fi a few months prior. Many books, including Kissed by God were included in my reading list as these were going to be my introduction into horror and mystery stories crafted by modern Bulgarian authors. As luck would have it, the first author to tackle on my reading list was decided by my Christmas present. So, what is Kissed by God all about?

Contrary to my thoughts before starting the book, Kissed by God is not a novel, but a collection of short stories. They are not connected and all of them have been written at different times. Some of them have elements of fantasy; some seem almost like a dream; others start like your usual crime or mystery novel; there are those, which can be dubbed splatterpunk; while others, as Vel said, are very heavily influenced by Western culture in general. Of course, I was not fond of all of the stories, but there were certain gems, which made me want to read further.

The most memorable and vivid tale, which comes to mind every time I think of Yavor Tsanev, must be The Maid. I admit, I love stories with a sudden twist or an unexpected end. But this one is close to my heart as a linguist, because it also uses a Bulgarian idiom at its centre. The traditional saying later unravels the meaning of the story itself – the boy who just couldn’t sit still and had to meddle with the maid’s chores.

Speaking of language and interpretation, I also loved the first story about The Flat. The tale, told from the perspective of both the real estate agent and the broker, explain the strange circumstances under which a flat has been rented, the strange events following soon after, as well as how a simple interpretation of the law ties everything together.

Although I also wasn’t fond of the tale Kissed by God, I do appreciate the little nod to Poe as Tsanev tried to present a psychological horror story based in the current Middle East. Inspired by The Pit and the Pendulum, Kissed by God tells the adventures of a young designer, who upon invitation from a very influential client, goes to the Middle East to attend an important party, only to find himself buried in the sand.

In late October 2019 I had the pleasure of meeting Yavor Tsanev at a little café/bookstore place, where he presented his books, as well as his self-published magazine. The setting was appropriately dimmed and hushed. There wasn’t even a chatter among the attendees, there was only the well-lit podium, where Tsanev read one of his stories. This gloomy scene was what met me when I arrived 40 minutes late to the venue.

The literature reading and the following interview were very intriguing. Many of the attendees were either young adults or students, some of which hope to become published authors. Obviously, there were many questions from the public related to story writing, editing and publishing, and Tsanev answered each one very candidly. He also explained that the reason he started publishing Dracus, his magazine, was to create a platform for budding authors, who want to write stories, which are different from what is currently mainstream in Bulgaria.

His approachability is what’s stuck to my mind. I’ve been to several literature readings and book promos at that point and he was the first author, who seemed genuinely interested in talking to all the people around him.

Despite the few stories I didn’t like, Kissed by God is an enjoyable collection of stories, which can easily be read in a day. The book is a nice introduction to Tsanev’s work as it encompasses vastly diverse tales, written at different times in his journey as an author. Tsanev explained his decision to publish Kissed by God through another publishing house (and not his own) as a “way to expose a different audience to his work and Bulgarian horror literature in general”. And what better way to do that than showcasing one’s personal explorations into the different literary subcategories of horror?