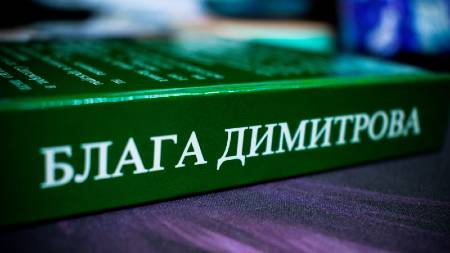 It’s time for another poem! Vel and I had a long discussion on which of Blaga Dimitrova’s works we should do a review, because, you see, she was a very prolific writer during her life. The complete works collection spans 22 volumes full with novels, essays, lyrics, poems, plays, commentaries, etc. But who is Blaga Dimitrova?

Being the inspiration of John Updike’s short story of the same name, Blaga Dimitrova was a Bulgarian novelist, poet, journalist, translator, and politician. She was born in 1922 in tsarist Bulgaria. By the age of 17, still in school, some of her poems started to appear in different magazines. She, then, studies slavic philology in the University of Sofia, and eventually completes a PhD degree in Moscow, Russia, all in order to further develop her writing talents.

Afterwards, she worked as a journalist and editor for various publishers and periodicals, which supported her writing career. In 1967, she and her husband became guardians of a little girl after visiting Vietnam during the war. They never manage to legally adopt her as her biological parents never agreed to it, despite letting their daughter go with Dimitrova’s family back to Bulgaria with their blessing.

Blaga Dimitrova’s activism also led to her being one of the co-founders of the National Club for Democracy and Rousse’s Committee for Environmental Protection. Eventually, she served as Bulgaria’s Vice President from 1991 until 1993, when she abruptly resigned from her post in protest of the behind-the-curtain play of the president at the time, who was also from her political party.

Blaga Dimitrova passed away on 2 May 2003, following a stroke and a long battle with cancer.

So, why did I list all these biographical facts about Blaga Dimitrova and why did we choose Liliana? Well, there are three reasons for this:

I’ve already included some information on the main protagonist in Liliana, but I want to elaborate further. As I mentioned, Liliana Dimitrova was a young activist, who became involved with communist groupings in school (and later in Sofia University) and later effortlessly rose to the position of Regional Committee Secretary of the BCP. From what little is known of her, Liliana was a bright student and, despite aspiring to study linguistics and be a writer, she was enrolled into the Law course in Sofia University.

Twice incarcerated in re-education/work camps for her dissident activities, Liliana was revered among her peers and working class people, who wanted a fairer treatment, better salaries, and better work conditions. She did not finish her degree and a few years before her demise, dropped off the grid by living illegally in a different city under an assumed name.

Liliana’s death was definitely avoidable and the story reads like a screenplay. She has always had a poor eyesight, but she never had any trouble going around Sofia because she was familiar with her surroundings. However, once she is sent to continue BCP’s work in Plovdiv, she found it difficult to navigate around town, whilst hiding and not being able to see much.

In 1944, the Plovdiv police decided to block the city in search of any dissidents, which made Liliana remain in her hiding spot – a chicken coop – longer than usual. After a while the police lifted the blockade, but because she never got the word that it was safe to move, Liliana continued hiding. In the meantime, the owner of the house, who was not aware of someone hiding in his chicken coop, called the police to report breaking and entering. The police quickly barricaded the hiding spot and demanded Liliana give herself up. She answered their orders by starting a gun shoot out. Ultimately, she reserved the final bullet for herself and ended her life then and there.

Living and Dying for the Cause

I wanted to find out whether the author’s curiosity in the life of Liliana is genuine or whether the poem was requested/edited by the BCP in any way. (They have been widely known for censoring many works of art and literature. Even some of Blaga Dimitrova’s works were denied publication at one point in time or another).

Even though their political views differed slightly, Blaga Dimitrova treated Liliana Dimitrova’s memory lovingly. Once you start reading the poem, you immediately see the love, respect and recognition Blaga Dimitrova has for Liliana and her activism. The author has taken upon herself to narrate Liliana’s entire life – from her childhood and the start of her political endeavours until her untimely death.

Blaga Dimitrova has also managed to perfectly encapsulate the energy of times gone by, when there was a certain fervour among the young for an ideal, just and fair life. Having in mind that Bulgaria has changed its form of governance four times in the span of 150 years, those were turbulent times. All the young people – educated or not – had very idealistic views of the future for which they were ready to fight.

On the other hand, Blaga Dimitrova has also given voice to all the mothers of such children, who silently acknowledged the hope and wisdom their children carried into the night when they left their homes to fulfil their secret duties. She also beautifully describes the whole emotional spectrum these mothers went through – from being suspicious of their children’s activities to hope their children will return safely without being arrested; from hoping to be let into the secret world of their children to unconditionally helping their cause because they secretly have the same desire for a better life; from the uncertainty of losing contact with their children for a long period time to the grief they feel when they have to level the dirt over their children’s coffins and pray.

Not being a big fan of poetry, I liked Liliana. I plan to check out other works by Blaga Dimitrova, possibly some of her novels. I know there has been a resurgence in the author’s popularity and I see many people, including some of my friends, often recommend reading Blaga Dimitrova’s works. I can see why now.

Last year we decided to read up on more Bulgarian authors, and somewhat blindly we chose a variety of writers we had heard good things about from friends, relatives and forums, or were simply curious about. Personally, I didn’t expect to settle on as many tales focusing on the change of power in Bulgaria from the tsarist to communist regime. Even works seemingly unrelated to the topic make mention of the transition in passing as it creates a pivotal point in a character’s journey (Transki Stories, for example).

So far we have reviewed The Stricken, by Teodora Dimova, which follows the lives of five women and their families through the change in regime, who can be described as bourgeoisie or aristocracy, and therefore show the events of the change in power through the lens of people who had everything to lose and nothing to gain. We read a few other poems by Blaga Dimitrova, and together decided to choose her poem Liliana as a contrasting work showing a different view of the events depicted in the other works.

Nelly has done a great introduction to Blaga Dimitrova and Liliana Dimitrova, person and character, but I would like to reiterate the humbler beginnings Liliana has compared to other female characters mentioned in the titles above. We have seen the destruction and horrors the change in regime has brought to the wealthy, but Liliana sets off to change the world not for them, but for the working class, for those who, like her own mother, are born into near poverty and labour in inhumane conditions to earn a pittance.

Throughout the poem Blaga Dimitrova reiterates Liliana’s youth and her beauty to reinforce the notion of her untimely death – and the great loss her death is for both the budding communist movement and her family and everyone who knew her. This reinforcement was almost abrasive for me at times, as Liliana’s strength of character, her resourcefulness and quick mind to operate as a field worker and later organiser to raise the working class to rebellion quickly removed any thoughts of Liliana as a human being, and I believe it was Blaga Dimitrova’s aim to draw back the attention to a the fact that Liliana was a person – one with a mission which absorbed all her waking and sleeping hours, yet one with fears, compassion, and vulnerabilities.

It was exactly those characteristics which made people believe in her; her bright eyes and warm smile making the ideal of equality, better pay and conditions achievable.

The poem itself is quite lengthy, with Liliana’s childhood and university years expanded and brought to the forefront for the same reason I mentioned above – to humanise the young girl Liliana, to make her more than a name on a piece of paper, more than a rebel. The volume of Blaga Dimitrova’s works we read the poem from has shortened the piece considerably – it is structured in multiple chapters, each one divided in numbered segments, and whilst initially each chapter was presented in full, the later ones started from segment 5 or jumped from 2 to 9. If anything, I was grateful for this. Humanising Liliana is tremendously important to truly appreciate her efforts and sacrifice, yet even the verses included accomplished this, and more. I find it difficult to imagine why the author chose to be so verbose, or perhaps it is I who is used to our modern succinct times where fitting yourself in 250 characters or so as our main way of communication.

Throughout the poem we encounter the character of Liliana’s mother. She isn’t even given a name, as Nelly explained, she is a collective character and thus can be anyone’s mother. We know little of her – she is a seamstress and her hair has gone white, and this is pretty much it. Yet any time she is mentioned I get a strikingly vivid image of her, bent over her sewing machine working night after night, supporting Liliana and her brother through their education, and then later when they fully turn to activism. This is who Liliana is fighting for – the overworked and underpaid drone, but through the poem we learn there barely is a conversation between Liliana and her mother. Liliana goes to many other workers, in different cities, and in multiple professions; her gaze is cast outwardly, and her own mother is left lonely with no one to look after her or reassure her.

The poem itself ends with the death of the mother – she has seen her children come to pass, the natural order is broken in the name of the greater good (arguably, I know) but other’s children survive and they all come to say farewell and send her off. It felt appropriate and provided closure for me.

Liliana does not live to see her dream realised – the tsarski regime overturned. In this sense, she dies pure, as a heroine of the fight, unsullied by the events which brought the communist party into power or the following persecutions and horrors depicted in The Stricken, for example. She dies for her ideal, and becomes part of it, unstained. In part, I think this is why Blaga Dimitrova spends so much effort to show Liliana’s story in full, instead of focusing entirely on her activism. To show that underneath the secret meetings, speeches and underground networking there was a flesh and blood young woman, with passions and struggles, which she puts aside to fight for what she believes is a better tomorrow.